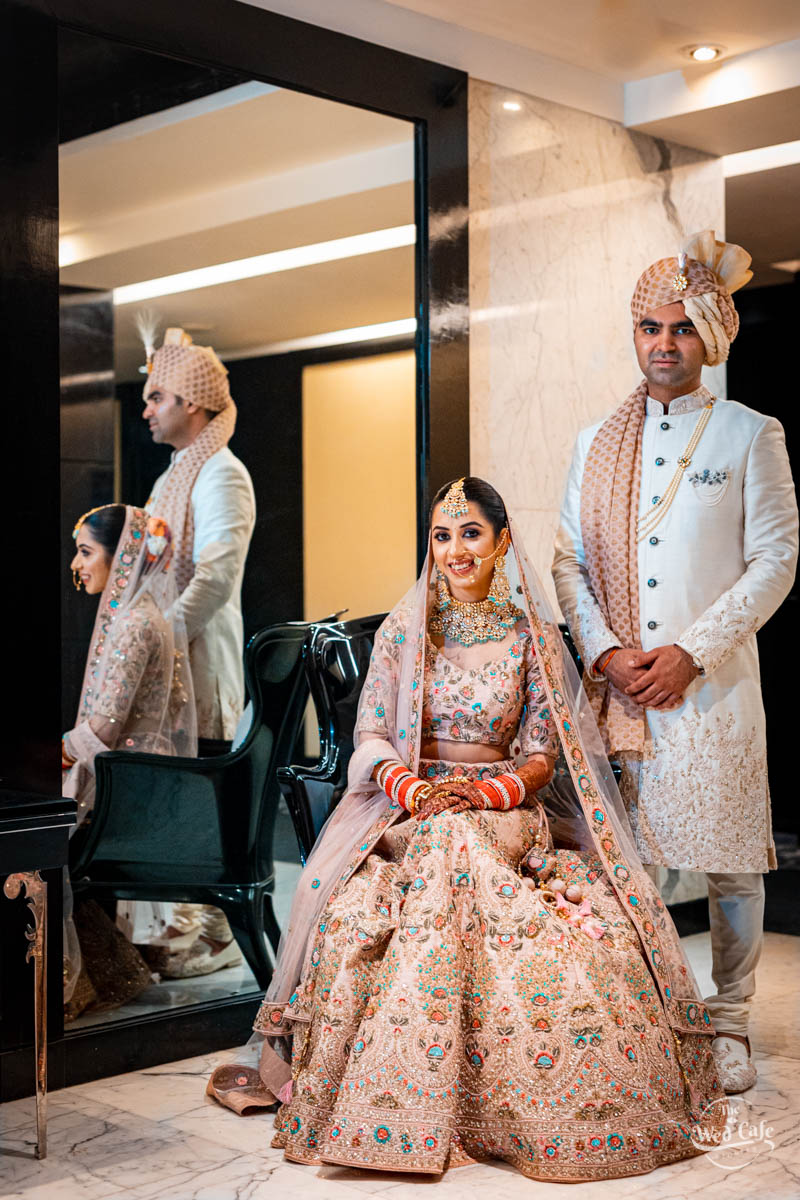 #Tanyash: A Wedding That Is High On Elegance And Romance

It is often said that marriages are made in heaven. You can call it luck or your fate, but you will meet your better half how and when it is meant to be and there are no two ways about it. Ashish and Tanya’s wedding was all about keeping it contemporary and elegant. Their story will engulf you with dreamy and romantic vibes. Scroll over and read for yourself!

How did they meet?

Tanya and Ashish were more like a match made in heaven. They both met each other through Tanya’s sister. In December 2013, they went on a trip to Jim Corbett with extended family and friends. In April 2017, they coincidentally met at a friend’s place when Ashish had come to India for 4 days to surprise his mom. They spoke that day and fondly connected well over their love for travel and their dream travel place – Morocco.

Time after that was all about long-distance calls and messages as their time zones were a big spoiler. A little later in June 2018, they had their very first date in Turkey.

Somewhere around October 2018, Ashish flew down to Thailand where Tanya was attending her friend’s wedding. That’s when he confessed his love for her and also met her friends as her boyfriend. With love and blessings by their side, they then decided to take a leap of faith and plan their future together. Romantic isn’t it?

Ashish and Tanya’s proposal story is so magical and has a lot of awe in it. This goes back to December 2018, where Tanya had gone to meet a common friend at her favourite Jazz bar.

While sitting and chatting around with her on the first floor of Piano Man Jazz Bar, she heard her favourite jazz song playing in the background. That obviously got her all happy without knowing what’s in store for her that night.

Seconds later she heard a very familiar voice on the mike saying “I’m trying to get this girl’s attention” and OMG it was Ashish!! She was numb and also filled with excitement as she saw Ashish standing with a mike, flowers and a bottle of champagne, on the ground floor in front of 100 people. He brought out a ring and got down on his knee and proposed to Tanya. With such a beautiful proposal, 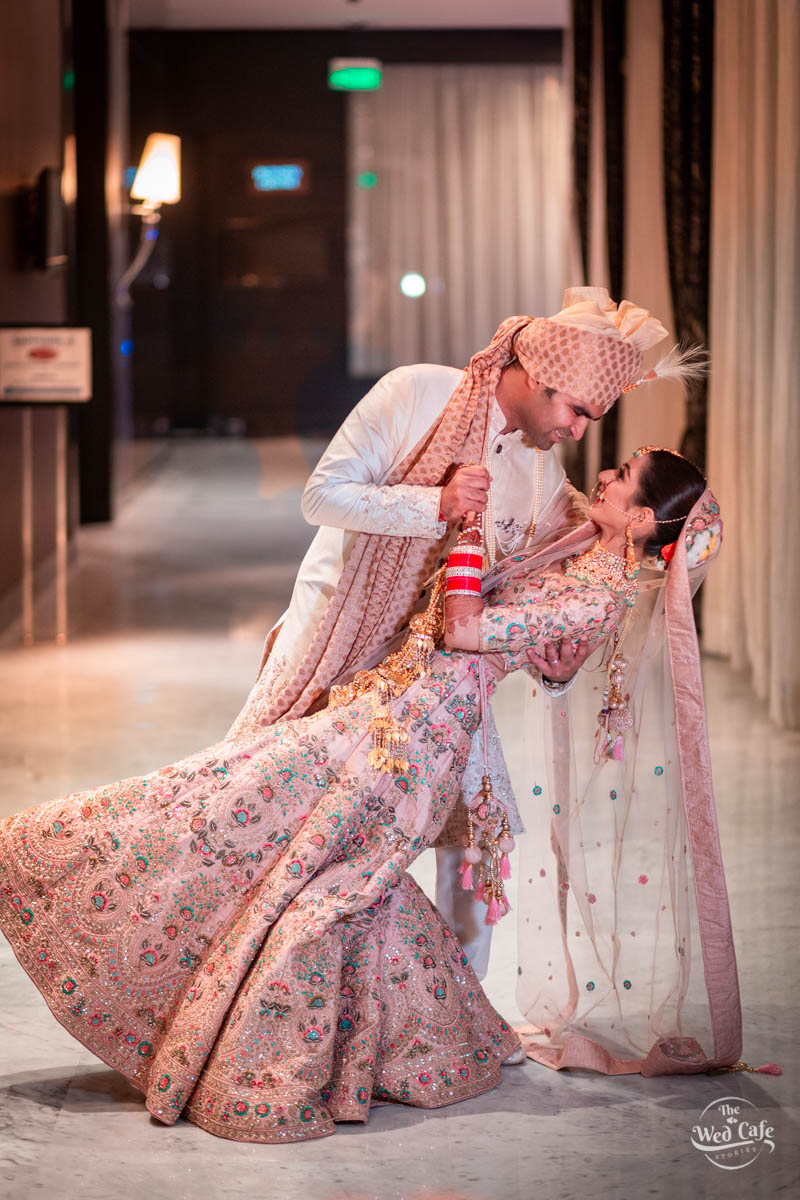 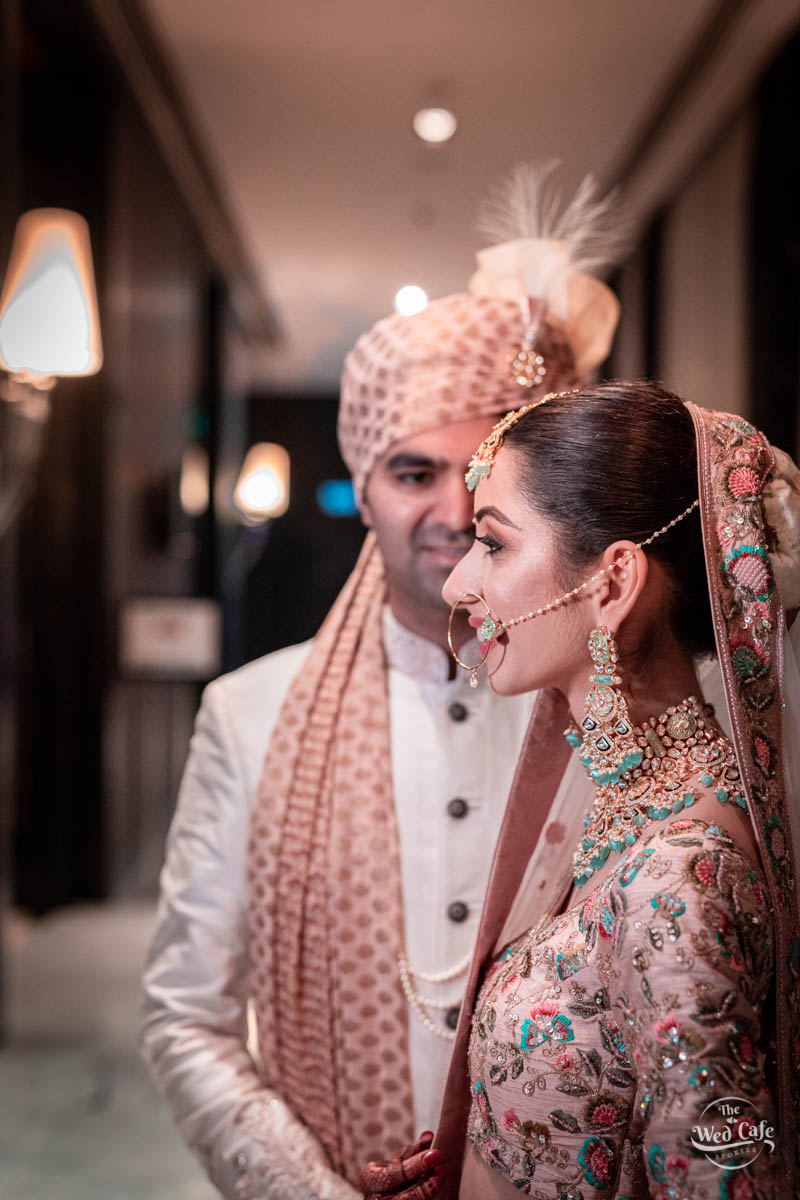 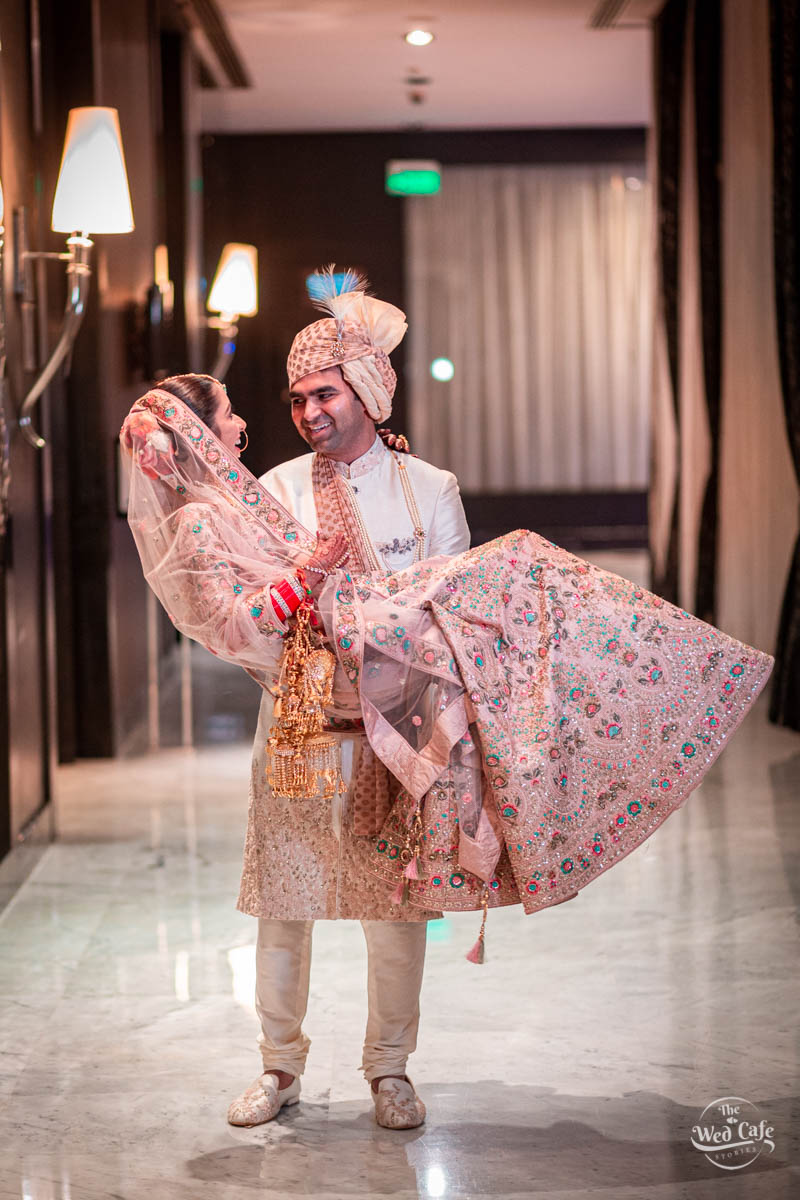 For the wedding, they opted for an elegant and surreal theme. They wanted it to be subtle and royal. The wedding theme was inspired by western weddings and mainly Canadian weddings. Hence, they chose white and pink as the colours for their dream day.

For the decor, they stuck by everything elegant and did absolute justice to it. They opted for white and pink roses all over. The inspiration for this theme came more from a Canadian themed wedding as their initial plan was to have a western wedding.

Their dream decor was brought to life by the very talented ‘Arun’ from the in-house decor team in  Radisson.

Tanya looked no less than a dream on her wedding day. We are sure that her groom would have surely skipped a heartbeat while he saw her. Her wedding outfits were picked up from Kalashree in Chandini chowk and Raro Naraina. For her makeup, she was dolled up by Pooja Khurana Beauty.

The couple went for a really cute hashtag with combining their names. Their wedding hashtag was “#Tanyash”. Along with a hashtag, the couple also created a website – Tanyaashish.com.

We loved the idea of the website and having everything put up there. We are sure everyone else would have loved this website too!

How did they come across The Wed Cafe?

For their wedding day, Tanya and Ashish were looking for an unconventional photographer who is experienced and professional rather than a regular traditional one. That’s when Tanya’s father gave her Rajesh’s number as her sister’s brother in law had worked with Rajesh in the past. Along with this Tanya also mentioned that she saw The Wed Cafe’s past videos and realised that Rajesh and his team could create what she wanted once she explained her vision to the team.

Tanya chose the perfect songs while she walked the aisle towards her charming prince. She entered on “Din Shagna Da” by Jasleen Kaur and “Nachdi Phira” from the movie Secret Superstar.

A Testimonial from the Bride

Here is a little testimony from the gorgeous bride:

“It was a great decision to work with Rajesh – The Wed Cafe. They were flexible and also accommodated most of our requests and most importantly created what we wanted. I think it’s important for the photographer to make the subject comfortable and they clearly did that well even when I was trying to put my thoughts into words and talk about Ashish on the wedding day, the entire team did their part to make me feel comfortable.

In fact, I requested Rajesh to personally be present on the wedding day, I’m not sure if he generally does that, but he did honour my request. In short, they left an impression after which I wouldn’t need to scout for any other wedding videographers for my friends and family in future. Kudos to the team.”

Tips From The Bride

These are some amazing tips and pieces of candid advice from the bride herself.

“Make the wedding about yourself and don’t do the customary things if you don’t want to. Plan it in a way that when you look back you remember some amazing moments with your life partner. All this while don’t stress and remember to have fun!”

We totally agree with the bride, your wedding is about you and your partner! Do everything that you’ll have ever dreamt off and only do things that would make you happy as a couple. This is a once in a lifetime celebration. Remember to enjoy it to the fullest!

At “The Wed Cafe“, we understand the importance of your wedding day and all the sentiments attached to it
Read More

Thank you for contacting The Wed Cafe Team! Please let us know how we can help you?